In honor of Black History Month and our initiative of bringing awareness to Black athletes in Triathlon…Now presenting our featured athlete, Andre Monroe. 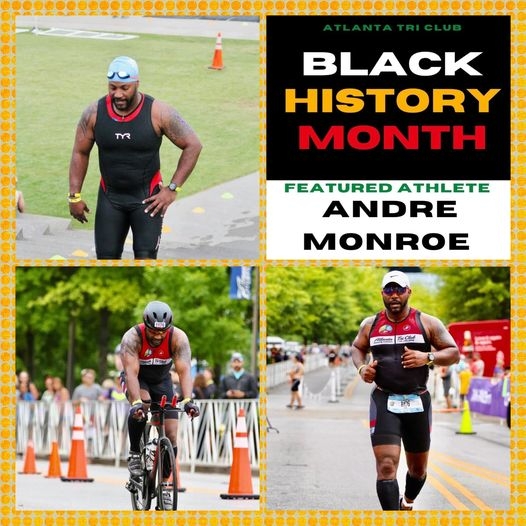 My swim struggles are well documented in our club, but the journey started when I was 5 years old. I suffered from severe asthma as a child, which impacted my lung development. My pediatrician prescribed swimming as a form of rehabilitation. I vividly remember my mother taking me to our local YMCA and enrolling me in swim lessons. On that first day, we practiced holding our breath and submerging our heads under water for a full, five-second count, holding onto the edge of the pool and kicking our legs, and other, relatively risk free, in-water drills. The instructor then equipped us with inner tubes and had us form a single line. Each kid (about 6 of us) was to walk to the edge of the pool and jump in, where the instructor would be waiting to collect us. The anxiety I felt in that single-file line as a 5-year-old, asthmatic kid, is the same anxiety I’ve dealt with at each swim start on race day. The dreaded pace line and methodical progression to the edge of the dock reminds me of that six-person line that formed from the edge of that YMCA swimming pool. I did not jump in that day. It wasn’t until the end of lesson #3, when the other kids had returned to the locker rooms, leaving just me and the instructor, that I finally built up the courage to jump in. And in that moment, I realized how much fun I had allowed fear to rob of me and that I preferred participating much more than spectating from the side, practicing boring kicking drills (side note: I no longer think kick drills are boring!). The swim is the most daunting discipline for many triathletes, and I have solicited coping advice from my coaches and fellow ATC teammates (#ATCLOVE). Ultimately, recalling this childhood memory is how I’ve been able to manage the fear and anxiety. I still have a good bit of anxiety at swim start, but as I mentioned, there is no fun in spectating!

“I wish I discovered this sport sooner”. I say this to myself, often. There is a myth that African Americans are genetically incapable of swimming. Although humorous (when discussed in a lighthearted context) it is just a myth. Pools were a rarity where I grew up. My high school did not have a swim team, the few local pools were far too crowded to accommodate any sort of lane swimming, and sports like Basketball and Football were more popular. The unfortunate reality is that most African American kids (~60%) never learn to swim, and you can draw a more extreme correlation to the percentage of African Americans that participate in Triathlon. If surveyed, most would likely cite the swim discipline as the primary deterrent. There is a saying that “you become what inspires you”. You see in others what you desire to one day be. I stalk (I mean follow) Sika Henry on social media, and she responds! Sika became the first, African American female pro-triathlete in 2021. Simone Manuel was the first to win an Olympic swimming gold medal in 2016. I am always amazed to hear or read “first African American...” as an accomplishment is being described, this far into the 2000s, but it is progress that must be acknowledged. These examples are monumental, and they open the doors for others to be inspired to enter. We will attract more diversity in Triathlon by being good advocates for the sport in the community and linking our time and resources to programs that have reach. This sport has so much to offer that extends beyond swim/bike/run. That is important, and the reason I am optimistic for a more diverse, Triathlon landscape in future.