In honor of Black History Month and our initiative of bringing awareness to Black athletes in Triathlon…We are pleased to present featured athlete, Andrea Jackson. 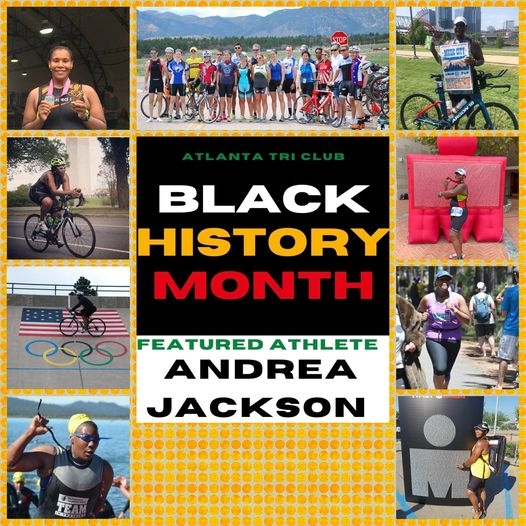 My name is Andrea. I joined the Atlanta Triathlon Club in 2020. While I'm newer to ATC, I'm no stranger to swim/bike/run. I became an official triathlon finisher after training with Team in Training and the Portland Triathlon Club for the Pacific Crest Triathlon Distance in Sunriver, OR in 2011.

Since then, I have traveled the country and the world to complete one 140.6 mile distance race, three 70.3 mile distance races (currently training to complete my fourth next month), the 2015 USA Triathlon Foundation Fantasy Camp at the Olympic Training Center in Colorado, Springs, CO, and numerous Olympic and shorter distance races with Athena podium finishes over the years. Every event has been unique in many ways, but there are some elements that remain a common occurrence. In particular, as a Black more specifically Afro-Latina (my father is Black and my mother is Puerto Rican) triathlete, I have gotten used to being one of few or sometimes the only participant (on or off the course) that looks like me. The Triathlete magazine article “Why Aren’t There More Black Triathletes?” (December 16, 2020) provides additional perspective, highlighting access, representation, and inclusion as opportunities for all of us to consider.

Throughout my 10 years+ triathlon journey so far the most negative racial experience related to the sport that I remember, happened shortly before moving to Atlanta, GA. Long story short, derogatory language was yelled at me as I was almost run-off the road while jogging during the day. Participating in sport while brown requires a heightened awareness of environments beyond expected challenges. After that experience and especially since relocating to the South where displays of Confederate flags are triggering, I am on higher alert when jogging or cycling on my own.

Truth of the matter, these types of incidents happen throughout and regardless of the sport, which amplifies the relevance of celebrating Black history this month and every month. Lessons from the past remind us that change, albeit slow, is possible. And, provide inspiration to strive for a brighter future.

“Representation is really important all across the board, just because it gives people that hope that even though things are really hard and it feels like with every step forward, it’s two steps back, if you keep grinding and if you stay passionate, then you can eventually reach that goal.” Angela “Overkill” Hill, first Black American woman to fight in a UFC main event.