Now presenting our next Featured ATC Athlete - Scott Black! Scott recently competed at the St George IronMan Championships! Congratulations on an epic race! Here is a bit about his journey in his own words… 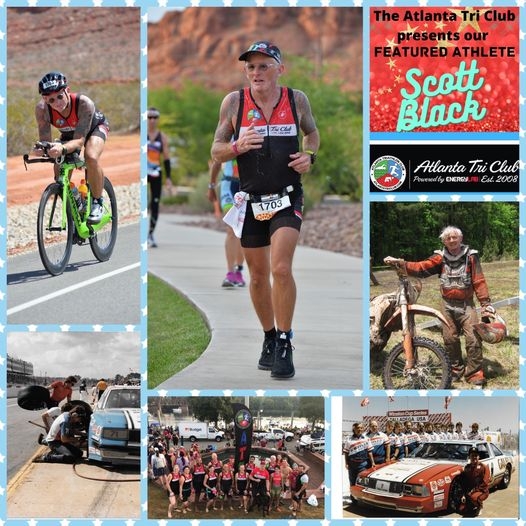 I have always been a typical type “A” person with a need to stay active. In addition to my occupation as an airline mechanic, I have been a team member of an ARCA stock car team and raced hare scrambles on my dirt bikes. When we moved to Georgia in 2010, I was overweight and suffering from an old back injury. We started making lifestyle changes toward better eating habits and exercise. I was not particularly fond of exercise but continued to press forward because I was seeing some good results. I decided to put my competitive spirit to work to stay interested with exercise.

In 2014 I joined the Delta Dusters, a running club at Delta Airlines. My first events were in 2015 and included the Atlanta Spartan Sprint and the Kaiser Permanente 5K that started at the old Braves stadium. I was hooked on running events from then on. From that point forward I was entering at least one event a month, including Spartan races all over the South and Midwest. I would pick all the really hard ones and had some really good finishes. I kept doing mostly trail races until joining the Atlanta Track Club in 2016 and competing in a good mix of trail and road races. My travels took me to many places including Amsterdam to participate in the World Airline Road Race.

In 2017 my interest turned to Ironman competition after watching a co-worker train for and finish the Chattanooga Ironman. I remember watching Ironman in the 1980’s on Wide World of Sports and thinking “How do they do that?” I loved watching Team Hoyt compete. I jumped in with both feet by selling all my dirt bikes, joining the Atlanta Tri Club, purchasing a bright green Quintanta Roo PR5 and entering the 2018 Augusta 1/2 Ironman.

One big problem though- I couldn’t swim. Tim Myers hooked me up with Sheryl Shectman as my swim coach and I attended as many swim classes as possible. With help from Sheryl, Allison Leppke, and the rest of the coaches and members at ATC I made it! 2018 was a great year of learning. I competed in and finished the Sweetwater Triathlon, 3 Tri the Parks events, Augusta 1/2 Ironman, my first marathon and several other running events.

After moving to Las Vegas in 2021, St George Ironman came open so I entered as an age grouper before it became a World Championship event. Glad I stayed in and didn’t defer. I trained very hard while dealing with moving into a new home, having COVID and all the other things life throws at you. 16 hours, 26 minutes, 51 seconds later, I AM AN IRONMAN! I always wanted to hear those words. It was a very challenging course for this amateur. I could never have achieved any of this without the help and support of my spouse of 36 years, Kevin. He takes care of everything so I can train.

What’s up next? Chattanooga full next year. I might even come and do the half in May.